Norton Priory Museum and Gardens is an award winning museum based in Runcom. It comprises the remains of an abbey complex dating from the 12th to 16th centuries, and an 18th-century country house.

The remains are a scheduled ancient monument and are designated by English Heritage as a Grade I listed building. They are considered to be the most imponant monastic remains in Cheshire.

The museum is home to more than 900 years of history, including a spectacular l4th Century Saint Christopher statue. 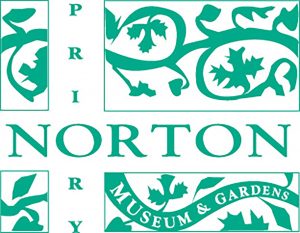 An 800 year-old coffin lid had to be re-located to make way for development work at the museum. This was set to be a challenging task due to the lid already being in a poor state of repair:

The 12th Century lid is an example of great craftsmanship. Highly decorated stone with a raised design in full relief, the inscription that once existed on the coffin lid suggests the lady buried in the coffin may have been called Alice, aged between 36 and 45 when she died, and buried sometime between 1300 and 1325.

Due to the age and state of the ‘Alice’ coffin lid, Norton Priory wanted to create a digital record and approached OR3D to scan the important, historical artefact. 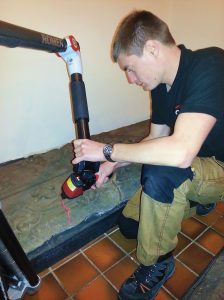 OR3D provided a digital model of the Alice lid to create an accurate record, right down to the smallest details in the design and even the marks from the tools used to create the lid.

Using an arm based laser, OR3D were able to capture the geometry of the coffin lid with an accuracy of 0.06mm. All of this wont: was completed on site, without having to move the lid.

Using data from the laser soon, a CAD model was created to fit with the highest accuracy using Geomagic Direct X.

This CAD model was then used to create photorealistic renders and a vinual, 3D model that can be viewed and ‘toured’ around, on the NoIton Museum website.

TheCAD model can also be used to create full size or scale models that can be pointed and displayed in the museum, allowing visitors to see the craftsmanship of the lid, while the original could be kept safe in its original setting. 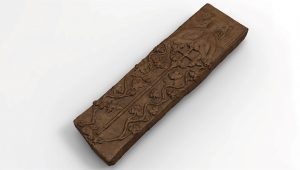 ‘The decoration would have required great craftsmanship to create and demonstrates that the family of the deceased person could afford to pay for a superior type of coffin,‘ said Lynn Smith from Norton Priory.

‘The coffin design is made up of a central cross, a dragon or some form of fantastic beast representing evil, from whose mauth and tail issue vine branches, and the image of a female figure around which an inscription once existed.

‘The coffin lid it is an important part of history that we knew we had to save.

‘We heard about OR3D via our contacts at the Daresbury Innovation Campus.

‘We were delighted with the work OR3D did and would definitely use them again and have no hesitation in recommending them to others within the heritage sector. “

To view a PDF version of this page, please click here.